With a population of more than 8 million, the Bangkok Metropolitan Administration (BMA) is home to almost one third of all Thai people living with HIV, an estimated 77 000 people1.

Bangkok was one of the first cities to endorse the Paris Declaration, and it has made HIV one of its top priorities, achieving a great deal of progress in recent years. Overall, the percentage of people living with HIV in the BMA who know their HIV status increased from 66% in 2014 to 92% in 2018. In 2018, the testing and treatment targets were 92–78–765. This has led to a strong city focus on reaching the second 90. 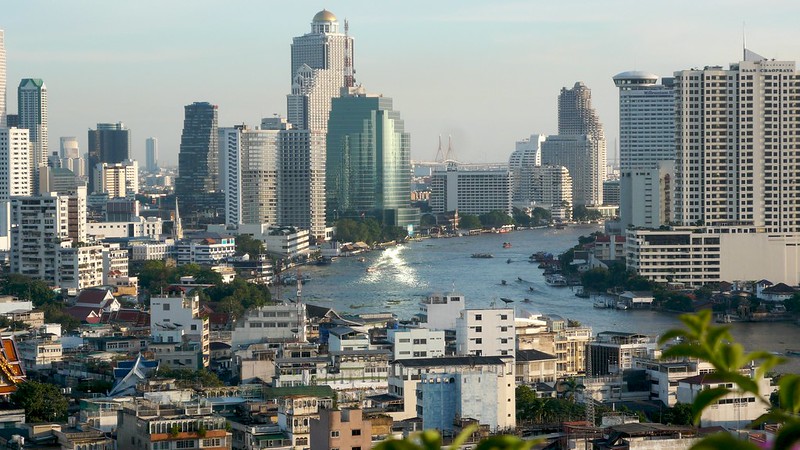 The BMA has long recognized the importance of partnerships to address HIV, particularly the key role of civil society organizations. In 2018, about 60% of the 4000 new HIV diagnoses among gay men and other men who have sex with men, transgender people and female sex workers were made by community-based services1.

Organizations led by key populations also are a critical part of the city’s health system and integral to Fast-Track solutions to end AIDS. Recently, Thailand achieved a major milestone by amending a law to allow civil society organizations to be officially recognized as implementing partners in the health system. Private hospitals also are essential partners in the HIV response, as nearly half of all people living with HIV in Bangkok seek treatment in these facilities.

Strong partnerships have allowed the BMA to incorporate the latest science into programmes designed to reach the 90–90–90 targets. For example, the pioneering programmes and research of the Thai Red Cross AIDS Research Centre have provided valuable evidence for the design of the city’s same-day antiretroviral therapy and PrEP, as well as services for gay men and other men who have sex with men and transgender people.

Other key partners in the city’s HIV response are the Ministry of Public Health, the National Health Security Office (NHSO) and other line ministries, as well as UNAIDS, the United States President’s Emergency Plan for AIDS Relief (PEPFAR), the Global Fund, academia and civil society organizations.

The BMA has explored a range of interventions to expand access to HIV services. These are focused on the groups that are at higher risk of HIV exposure, such as gay men and other men who have sex with men and transgender people, and many are led by peers from those same population groups.

Bangkok was one of the first cities in Thailand to provide PrEP for key populations through community-led services, public hospitals, private clinics and BMA public health centres. Starting in 2015, the first PrEP demonstration project was conducted by key population-led partners, and the PrEP programme is currently being rolled out across the city’s health facilities. In 2018, Bangkok accounted for almost 80% of all PrEP users throughout the country, and more than 90% of PrEP has been delivered by community- and key population-led services for gay men and other men who have sex with men, transgender people and sex workers. Various communication campaigns have aimed to increase the demand for PrEP among key populations. These campaigns use “health empowering” rather than “risk reduction” messages, and they are conducted via online social media, mobile road shows and outdoor signs.

The city is partnering with private hospitals and large government facilities to expand same-day antiretroviral therapy services to keep people living with HIV in the treatment and care system. Same-day services are available to all people who need them. Research has shown that 90% of those who tested positive accepted same-day antiretroviral therapy initiation, resulting in low loss-to-follow up and high rates of viral suppression2. To ensure that no one is left behind, the governor of Bangkok approved an additional budget to provide antiretroviral therapy for undocumented migrants and non-Thai residents, and to supplement costs that are not reimbursed.

The Bangkok Partnership for Zero Discrimination is a collaboration between the BMA, the Ministry of Public Health, UNAIDS, PEPFAR, civil society and key populations. It is committed to advancing the well-being and dignity of all groups. An important activity of the Partnership includes the training of healthcare workers to provide appropriate and sensitive services. In 2019, the BMA launched e-learning for health-care staff in selected hospitals.

Through this range of innovative strategies, Bangkok is making progress towards ending AIDS in the city. In the words of the Governor of Bangkok, Pol Gen Aswin Kwanmuang, on World AIDS Day 2018: “I strongly believe we must reach people being left behind. As part of our commitment, we expand HIV services and improve access to testing and treatment, through decentralized health units and community-based organizations. Catalysing innovation for people who need it most, pursuing integration and strong partnerships are at the heart of Bangkok’s achievements.” 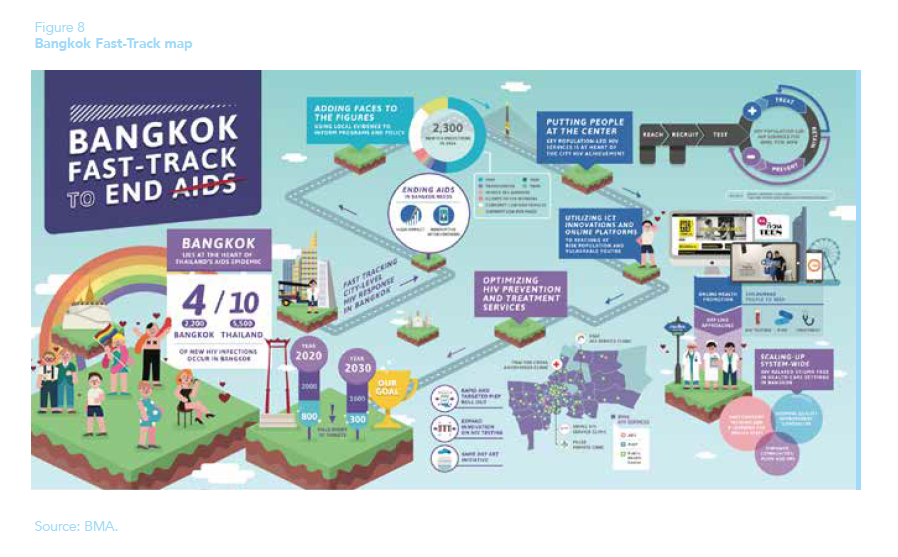 1 Data from the Division of AIDS and STIs, Ministry of Public Health (Thailand), August 2019 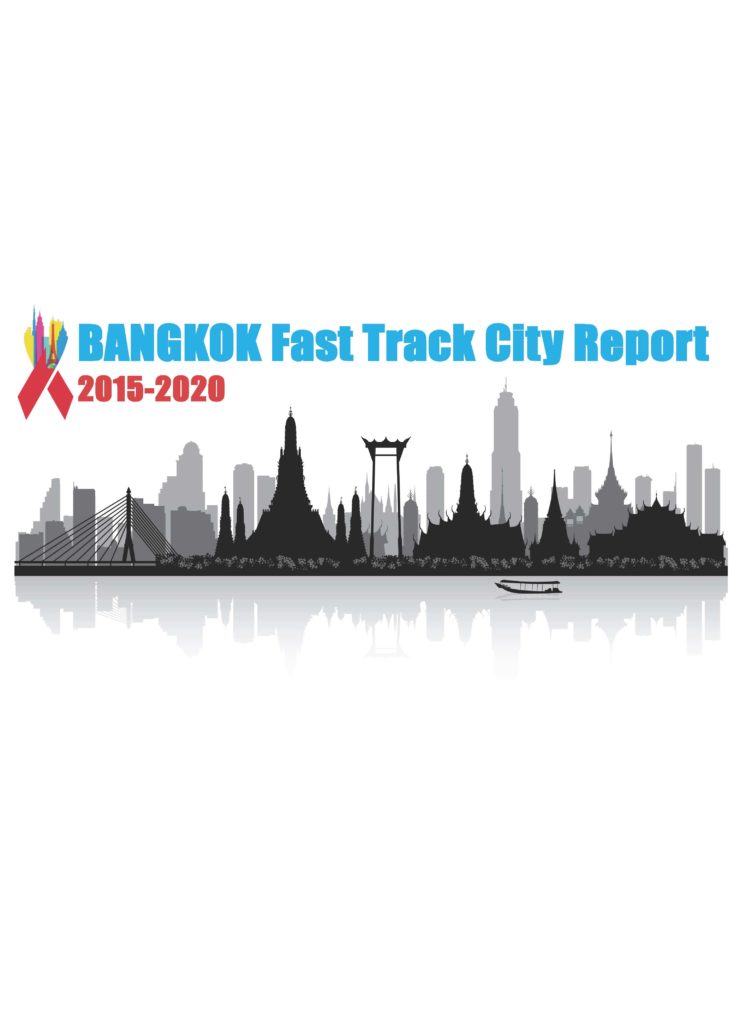