Jakarta is the capital of Indonesia and its largest city, with more than 10 million inhabitants. Of those, an estimated 66 000 are living with HIV. This represents 12% of the national HIV burden, making Jakarta the heart of Indonesia’s HIV epidemic1. Current data for Jakarta suggest that around 98% of people living with HIV know their status, but only 43% of those are on treatment1.

In 2015, the governor of Jakarta signed the Paris Declaration and formally urged the mayors of the five Jakarta municipalities to develop their workplans and budgets in line with the Fast-Track Targets2.

HIV prevalence in Indonesia is highest among young people aged 15–24 years: they account for more than half of all new infections. At the same time, their knowledge of HIV is poor, with fewer than 15% of this age group having comprehensive knowledge of HIV3.

In Jakarta, young members of key populations such as sex workers, gay men and other men who have sex with men and people who inject drugs are most vulnerable to HIV. Despite this, many barriers hamper their access to HIV services. For instance, fear of stigma and discrimination in health-care settings discourages people from going to clinics for testing and counselling. For this reason, young people often prefer to be accompanied by outreach workers when visiting clinics, with community-friendly clinics becoming the preferred place for young key populations to access services.

HIV prevalence among young men under the age of 25 who have sex with men is estimated to be 24%, and incidence in this population has been increasing in recent years1. Although there are HIV clinics in Jakarta that provide antiretroviral therapy to young people, a key challenge for the city is to reach these young people with information on HIV and to increase the number who are accessing
testing and counselling services.

Research funded though the Fast-Track cities initiative showed that young men do not relate well to traditional HIV education, and that they would like information to be presented in more approachable and friendly formats, such as short articles, graphics and games2. The high levels of digital literacy in Jakarta suggested an innovative approach: the development of an interactive mobile application in the form of a chatbot, a virtual character that can simulate conversations using artificial intelligence technology.

With support from the Fast-Track cities initiative, the chatbot—Ask Marlo (or Tanya Marlo)—was integrated into the popular messaging application LINE, which is already widely used by Jakarta youth (“Tanya” means “ask” or “inquire” in Indonesian). Marlo is a friendly character who speaks to young people using their everyday vocabulary, giving appropriate and confidential information and advice.

Ask Marlo has four main features: HIV Info, Quiz, Counselling and HIV Testing. HIV Info provides themed HIV information that is presented as short videos, infographics and factoids, while Counselling gives users the option to connect to a trained counsellor who can answer questions and offer emotional support. HIV Testing supplies a list of clinics in Jakarta that offer HIV testing services, even providing directions, pricing and opening hours; users can make a reservation to get tested at any of the eight clinics, with a confirmation sent by email.

Ask Marlo was launched in December 2018 at a press conference attended by 21 journalists from prominent print and other media. This resulted in a large number of enthusiastic stories in print, online media and social media that have helped raise awareness of the service. Responses from young people have been encouraging, describing the chatbot as “so youth-friendly!” and a place where “we don’t have to be ashamed to ask anything related to HIV”3.

By July 2019, seven months after its launch, Marlo had reached more than 3000 people with news and information and more than 400 with counselling and advice4. Monitoring and research shows that the Counselling feature is the most popular part of Ask Marlo, with around 50 users engaging with the counsellors every month5. The data also show that user numbers increased significantly with media and social media exposure, particularly posts on Instagram and Facebook.

One advantage of this approach to HIV education is that the platform provides ongoing learning, which in turn helps improve the chatbot’s ability to reach the desired population. For example, users have taught Marlo interesting keywords that were previously unknown, and these can now be integrated into new content.

A chatbot like Marlo is high-maintenance and requires constant attention, updates and improvements. In a digitally sophisticated environment, however, the results are potentially significant, and large numbers of people can be reached. The Indonesian Ministry of Health has expressed strong support for Ask Marlo, and there is discussion about expanding Marlo to other Indonesian cities and adapting the technology for use in other settings. 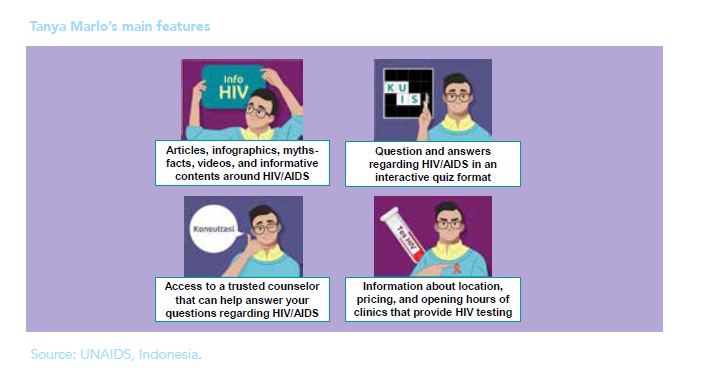 The power of partnerships

Jakarta’s successes show how effective working with a broad range of city and non-city partners can be. The strength of the city’s HIV response lies in working with communities and harnessing community expertise to reach more people with better services; empowering stakeholders to use information; and building collaboration between the city and community and civil society partners.

Strategic information – including HIV estimates and projections and an Investment Case Analysis – supports Jakarta policymakers to decide on the priority actions and resources needed to reach key targets – and to advocate for them. The city used a robust process to develop the HIV estimates and projections, beginning with capacity-building for university and Provincial Health Office (PHO) staff on the Asian Epidemic Model (AEM) and Spectrum. Training was provided on the AEM tool, including data input and analysis; the production and interpretation of results; and policy analysis. This was followed by a workshop with the Indonesia Public Health Association to finalize HIV estimates for five Jakarta municipalities and eight Greater Jakarta districts, and to produce an Investment Case Analysis. The process included analysis of policy and resource needs for different scenarios, as well as assessing cost-effectiveness. In addition to the estimates, the workshop also produced HIV projections for various impact indicators (such as data on the current number of people living with HIV, new HIV infections, AIDS related deaths and PMTCT needs). The data were immediately put to good use in a strategic policy brief.

Jakarta’s multisectoral Action Plan, which will be implemented from the beginning of 2022, is based on these projections and the Investment Case Analysis. A series of consultation meetings with stakeholders, including the Jakarta Provincial and District Health Offices, NGOs, and development partners, helped to ensure that the Action Plan is appropriate and inclusive. It is aligned to the National Action Plan on HIV/AIDS and will guide the city’s programming until 2024.

Other inputs used by stakeholders to inform programme planning and development include the Jakarta fact sheet (updated every semester using existing data from modelling, integrated biological and behavioural surveys (IBBS), the National AIDS Spending Assessment (NASA), and routine programmatic data. It is used to provide partners with the latest data available on the HIV epidemic, programme coverage and human rights. In addition to the Fast-Track City Dashboard, Jakarta has its own dashboard, JakTrack (“Knowledge and Reporting Hub for Fast-Track Acceleration”) to monitor the HIV response. This was created and is maintained by the FHI360 Linkages across the Continuum of HIV Services for Key Populations Affected by HIV (LINKAGES) project.

The city is also working to strengthen capacity of its own staff members and those of civil society organizations in data analysis and use. For example, at a workshop organized by the Indonesian Public Health Association (IPHA) and UNAIDS, representatives of civil society organizations and networks of key populations were able to learn about different sources of HIV data, how to interpret data, and how to use data for advocacy. 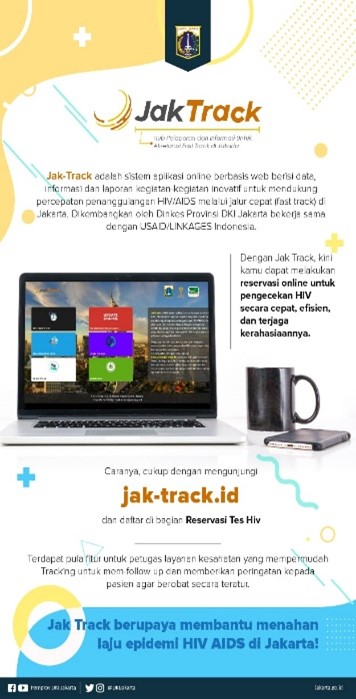 The severe challenges raised by the COVID-19 pandemic served as a catalyst for the implementation of innovative HIV programme approaches that have helped maintain and even further improve access to essential HIV services.

Community-led research and activities are increasingly central to the HIV response. In Jakarta, the AIDS NGO Forum receives Fast-Track City support to strengthen its role in conducting multisectoral advocacy on HIV. Community-based guidance was developed to improve cross-district collaboration and referrals in Jakarta and Greater Jakarta, and to improve community responses – particularly during the COVID-19 pandemic.

Support was also provided to networks of people living with HIV to conduct surveys assessing disruptions to HIV services and the needs of their members in Jakarta (and elsewhere in Indonesia). The first survey was conducted at the start of the pandemic (the end of March 2020), with a follow-up survey at the end of August 2020. Well over half (57%) of people living with HIV in Jakarta only had a one-month stock of treatment, and many faced additional challenges, including loss of income and an inability to afford adequate food for themselves and/or their families. The survey included inputs from community-led organizations on how to sustain local, community-delivered services. The survey report was delivered to the Ministry of Social Affairs as part of advocacy for additional funding and interventions.

In response, the Jakarta Provincial Health Office has taken action, with support from LINKAGES, to ensure that HIV services are not disrupted, including by maintaining voluntary counselling and testing services and through multi-month dispensing of antiretroviral (ARV) medications. LINKAGES also reinstated a dedicated viral load sample transportation system – Jak-Transport, that uses popular ride-based mobile apps and transport courier services – after it was temporarily suspended, and provided drivers with protective equipment. The system was also adapted and expanded to ensure the home delivery of ARV medications to people living with HIV using motorcycles or courier services (Jak-Anter).

This dual approach led to substantial improvements in coverage of viral load testing and access to treatment among Jakarta’s people living with HIV. The costs of home-based ARV delivery were also lower than for clinical visits. Scaling up Jak-Anter could therefore save money, facilitate the promotion of multi-month dispensing, and significantly reduce interruptions in treatment – improving retention, adherence, and viral suppression beyond the COVID-19 pandemic.

Webinars on mitigating the impact of COVID-19 on the HIV response, and highlighting Jakarta’s efforts as well as good practices from other cities, were organized by the Association of District Health Offices (ADINKES) with UNAIDS and LINKAGES. These helped partners to reflect on and improve their responses to the pandemic. Other activities that continued online include partner coordination meetings and PHO/IAPAC training. These proved so successful that the PHO plans to move more training online (or use chat platforms such as WhatsApp), even as the situation returns to normal. Online training was more efficient and effective than in-person training, with savings in terms of time, logistics and other resources – and more people trained than originally planned. There are also plans to integrate the COVID-19 training content developed by IAPAC into national COVID-19 training. 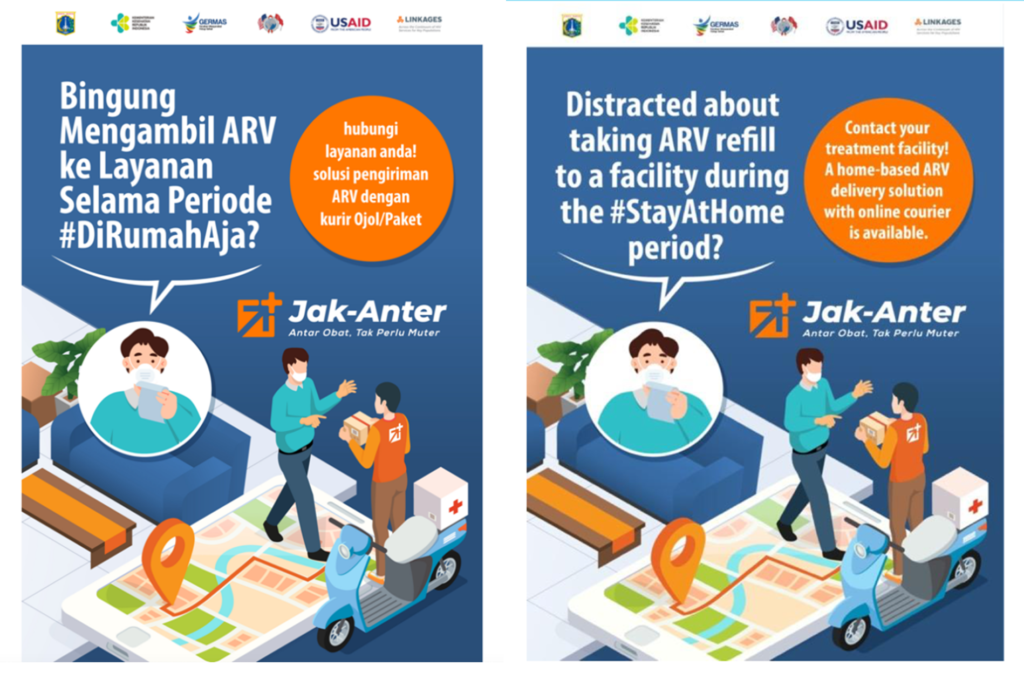 None of this work would have been possible without building and strengthening partnerships in Jakarta. Civil society organizations are consulted in the design of all activities, and are involved in their implementation. Jakarta has also re-energized coordination of its HIV response through new quarterly stakeholder coordination meetings. These involve national and local government, civil society organizations and other development partners (including LINKAGES and PEPFAR- and Global Fund-supported partners). At the meetings, stakeholders discuss quarterly achievements and challenges, share good practices and lessons learned, and undertake joint work – such as reviews assessing the city’s progress towards the 95-95-95 treatment targets. They also agreed on an action plan to improve Jakarta’s treatment retention strategy.

Tanya Marlo, Artificial Intelligence based Chatbox to reach out to young key populations in Jakarta 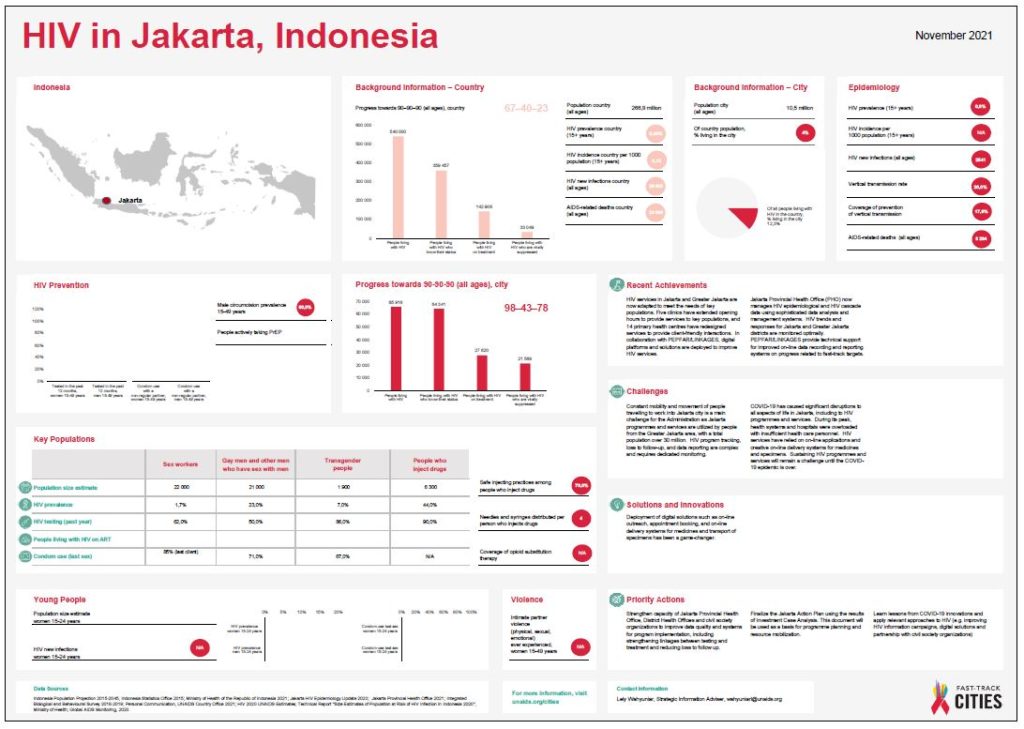