In Kampala, increased city leadership and commitment to leaving no-one behind in the HIV response mean better access to services for key and priority populations, and greater prominence for HIV-related messages.

Kampala’s HIV epidemic is significantly worse than Uganda’s – with city prevalence at 8.5% compared to national prevalence of 6% – while its response is underperforming. The city has achieved 57-72-95 against the 90-90-90 treatment targets, while the country as a whole has reached 93-100-921. This is in part due to the fact that members of key and priority populations2 are not seeking out HIV services at city facilities, or only seeking out services when they have advanced stage HIV infections. In some cases, they attend private health facilities – which restricts the availability of vital data about the epidemic and response – or self-medicate using pharmacies, which puts their health and that of others at risk. The Kampala Capital City Authority (KCCA) is therefore taking steps to ensure that KCCA facilities provide an atmosphere and services that are friendly to key and priority populations. This includes working with health care staff to improve awareness and decrease stigma and discrimination directed at members of key and priority populations.

Increasing access to services for key and priority populations

Increasing access to services for key and priority populations means knowing what services exist. The KCCA has completed a mapping exercise to identify and locate key-population friendly health services and other distribution points in the city. The exercise was undertaken with the Lady Mermaid Empowerment Centre (a sex workers’ organization) and the Uganda Key Populations Consortium.

A mobile application providing information on these services and based on the map was launched in October 2021 by the KCCA. The app will not only help members of key and priority populations to access services, but will also provide data to improve the city’s strategic plan for HIV and feedback that can be used to improve the services.

To ensure the involvement and participation of those affected, in-person and virtual meetings were held with young people living with HIV and representatives of key and priority populations, including sex workers, men who have sex with men, transgender people, people who use drugs and long-distance truck drivers. The meetings provided opportunities to introduce the concept and obtain essential input and buy-in, with the representatives making suggestions on how to improve the tool. The app has been disseminated in four of the city’s five divisions, and training has been provided to KCCA teams and to representatives of key and priority populations and youth groups on how to use the app. They will then go on to share this information and knowledge with their peers.

The plan is for the app to be updated with new or revised information on an ongoing basis. This is a key part of the project’s design, with beneficiaries able to provide input on how to improve the app at regular stakeholder meetings. For example, representatives of long-distance truckers – who constitute the largest proportion of sex worker clients, and are an extremely mobile population, making them particularly vulnerable to both HIV and COVID-19 – suggested that the app could be broadened to include both HIV and non-HIV services. Uganda also acts as a hub for drivers from neighbouring countries (including Kenya, DRC, Somalia, and South Sudan), as well as refugees, who do not speak the language or know where to get needed health services. The app could be a key tool in ensuring that these populations can access prevention commodities and get tested. An SMS option for those who do not have smart phones or access to the internet is being considered.

The app itself also enables users – including members of key populations and young people – to communicate their experiences in writing and confidentially, which is important in situations where making a verbal complaint feels dangerous. Ultimately, the aim is to increase access for members of key and priority populations to access HIV prevention and treatment services without stigma or discrimination. 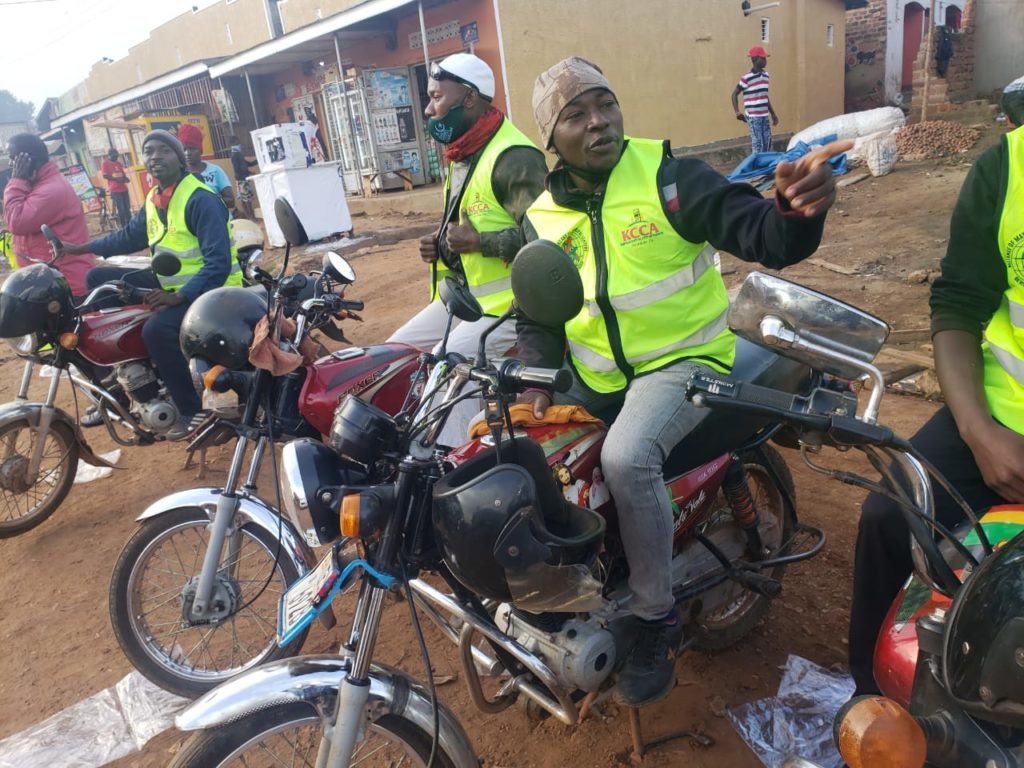 The Fast-Track City project has made a real difference in terms of high-level, genuine and public commitment to the HIV response. City leaders are enthusiastic about demonstrating this commitment through a range of different communication methods, including radio talk shows and television. For example, district leaders relayed the message that people living with HIV are a priority group for vaccination during radio talk shows about COVID-19 and the city’s response.

This leadership has been particularly evident with regard to the new app. Leaders have participated in stakeholder meetings to showcase the fact that the app is tangible evidence of their commitment to an inclusive HIV response and to bringing services to those who need them. They have also addressed confidentiality concerns, making a commitment to beneficiaries that any information shared through the app would remain private and that back-end services would be monitored by both KCCA technical staff and a key or priority population representative.

District leaders have also publicized the app through direct marketing strategies – such as wearing t-shirts with messages about the right of all to HIV-related services. An innovative partnership between the KCCA, UNAIDS and the Alliance of Mayors and Municipal Leaders on HIV/AIDS in Africa (AMICAALL) is improving HIV prevention communication using boda boda (motorbike taxi) drivers. HIV prevention, gender equity and gender-based violence messages in local languages have been printed on drivers’ jackets, which are then seen by a wide audience. Similar masks and stickers have been produced for taxi drivers and their cars. This campaign links HIV with the broader context of both KCCA commitments and interlinked challenges such as gender and COVID-19. Division health education teams, equipped with megaphones or public address systems mounted on pickup trucks, have visited key hotspots – including slum settlements, markets and boda boda ranks – to sensitize communities about HIV. 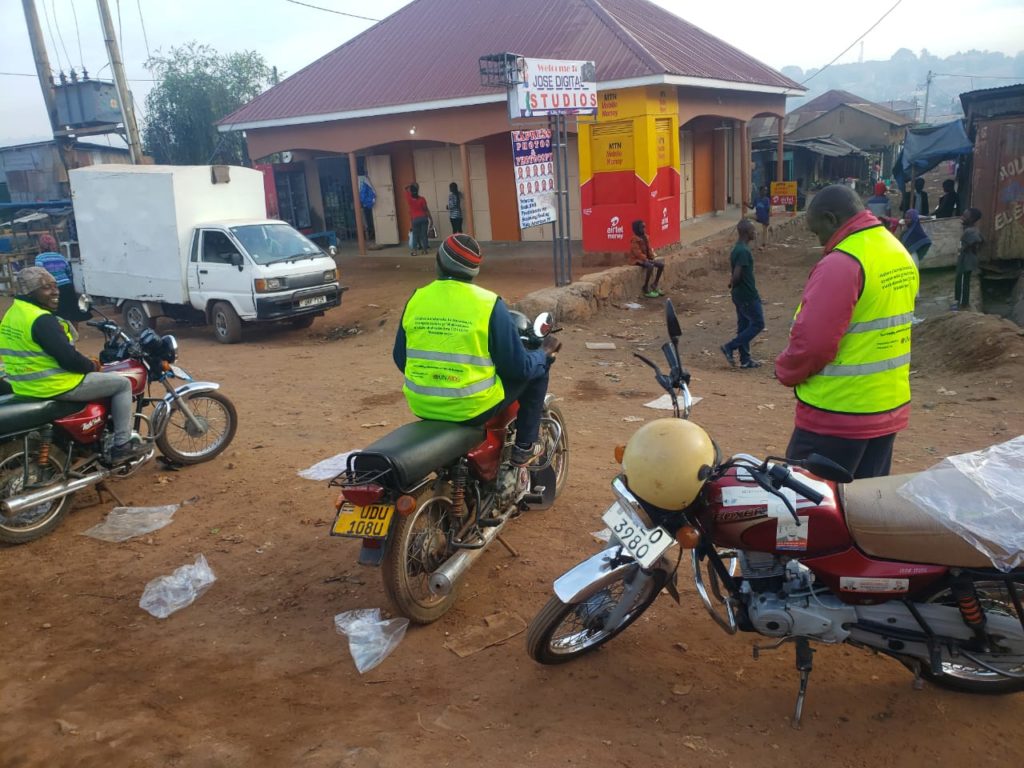 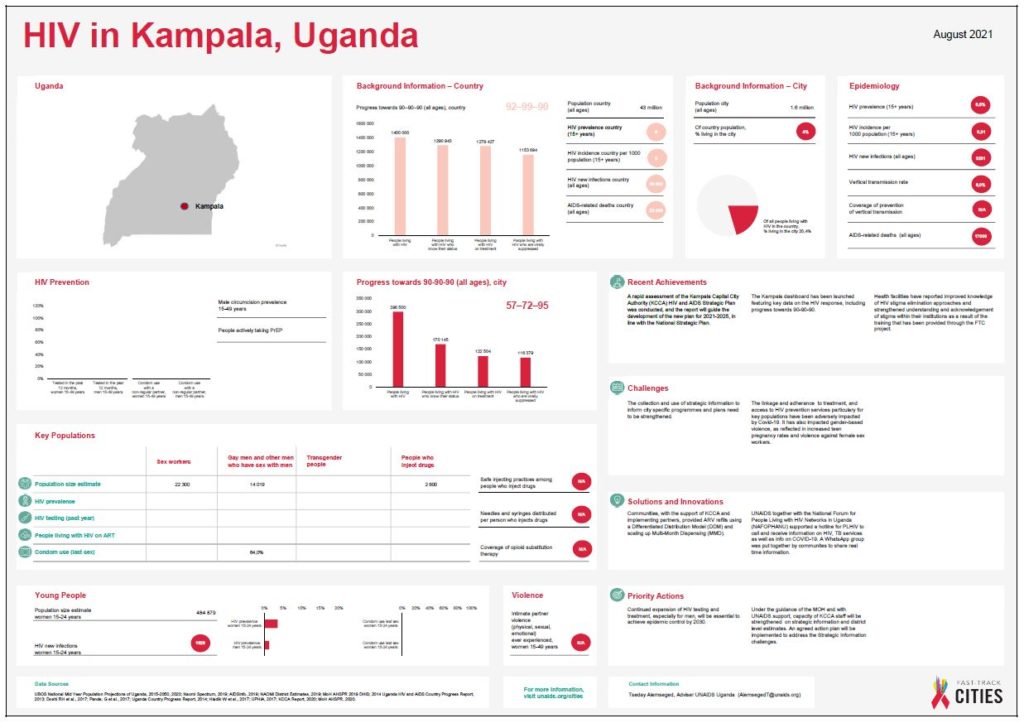