London is the first city in the world to exceed both the UNAIDS targets of 90–90–90 and 95–95–95, with 2017 figures confirmed at 95–98–97. In other words, 95% of Londoners living with HIV know their HIV status, 98% of people who know their HIV-positive status are accessing treatment and 97% of people on treatment have suppressed viral loads2. Nevertheless, HIV remains an important problem in London, and the city’s next goal is the ambitious target of getting to zero: zero new HIV infections, zero preventable deaths and zero HIV-related stigma and discrimination by 2030. 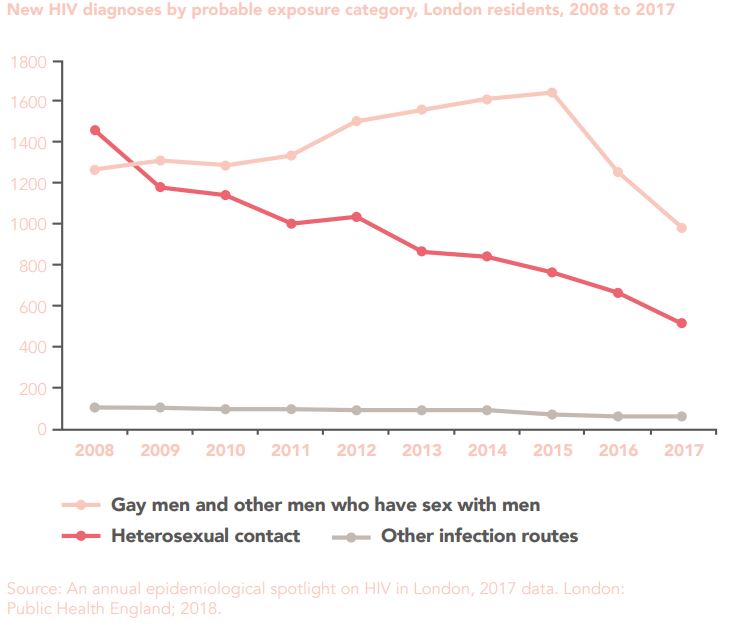 London’s experience illustrates the value of combination HIV prevention, bringing together biomedical, behavioural and structural interventions to focus on the communities that are most in need in order to have maximum impact.

A supportive national and local policy context—exemplified by a national sexual health framework, local work through the London HIV Prevention Programme, high-profile campaigns, high-quality epidemiological data, the exceptional expertise of London’s clinical and voluntary sector services, and community activism—have all been key drivers of change and crucial to the success of the response.

HIV prevention was made the statutory responsibility of local government in 2013, and the London HIV Prevention Programme and local government decisions on HIV testing have been critically important in turning around the epidemic (which rose exponentially between 2005 and 2013). In 2013, the London HIV Prevention Programme represented a new strategic approach, with new investment and new prevention methods for London, including Do It London, which was the first large, London-wide HIV campaign since the 1980s.

The Do It London campaign continues to make a significant contribution to raising awareness, tackling stigma, promoting combination prevention and contributing to London’s recent steep decline in new HIV infections. The campaign was launched in 2015 and is jointly funded and delivered through a unique partnership of all of London’s boroughs. The programme is based on delivering sexual health
promotion outreach to gay men and other men who have sex with men and other communities that are at increased risk of HIV exposure; it also features a free condom distribution scheme across more than 60 gay venues in the capital (For more on the Do It London campaign, please see: www.doitlondon.org). Do It London was the first official campaign to promote PrEP and U = U alongside more conventional HIV prevention methods (such as condom use and regular testing). After the campaign began, there was a citywide reduction of 37% in new HIV diagnoses (40% among gay men and other men who have sex with men) between 2015 and 20171. 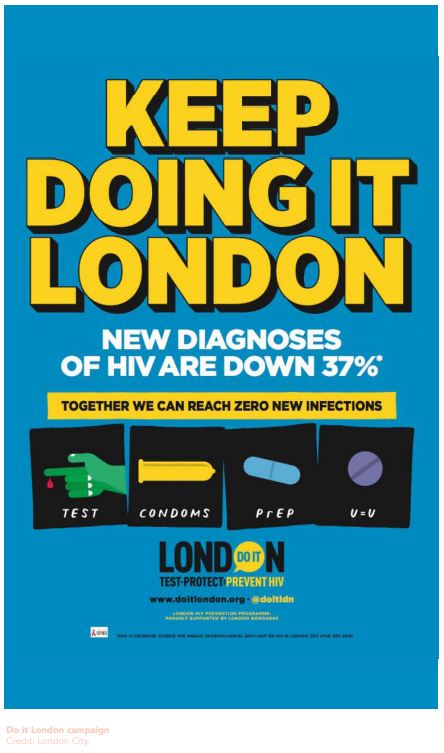 Increased HIV testing has been pivotal to reducing HIV transmission because it reduces the number of people who are unaware that they are living with HIV and opens the door to prevention initiatives for people who test negative. In 2017, a total of 365 770 HIV tests were conducted in specialist sexual health services in London, an increase of 5% over 2013. This was supported by a significant increase in HIV testing in complementary sites, including community outreach, primary care facilities, emergency departments and online self-sampling.

Rapid initiation of treatment for people who test HIV-positive is another key element of London’s success, enabling people with HIV to become virally suppressed, thus reducing the time the person is infectious and maximizing their health. In 2017, 73% of Londoners newly diagnosed with HIV started treatment within 91 days, and a significant number started earlier, particularly at the steep-fall clinics—sometimes within 48 hours of diagnosis (Steep-fall clinics are sexual health clinics—especially those for gay men and other men who have sex with men—where HIV has fallen significantly. See: ‘Do it your way’ and help prevent HIV. In: Evening Standard [Internet]. 6 July 2018 (https://www.standardco.uk/lifestyle/health/do-it-your-way-and-help-prevent-hiv-a3874651.html)).

The fact that HIV testing and antiretroviral therapy are universally available without charge in the NHS is an important component in London’s success. However, even with the universal availability of first-class treatment by the NHS, it took time to scale up each component of the cascade: investing in HIV testing, prevention and treatment campaigns; scaling up HIV testing; disseminating and embedding evidence-informed treatment protocols; and working with patients on adherence and engagement with antiretroviral drugs. These steps have all been necessary to maximize the uptake of universal services.

London’s vibrant, diverse and engaged voluntary and community sector has been another key element of the fight against HIV since the beginning of the epidemic. The sector has been partners in prevention, patient care, and social and peer support, and in wider reproductive and sexual health programmes. Local community-based organizations have been important partners in expanding HIV
awareness, tackling HIV stigma and scaling up prevention initiatives, including HIV testing and linkage to care. With support from regional and national funding, they have been drivers of innovation, despite facing considerable pressure as funding support has been reduced, commissioning arrangements have been transformed, and the needs of people living with and at risk of HIV have evolved. Nevertheless, their knowledge of (and acceptance by) communities, relative cost-effectiveness and proactive engagement continue to position the voluntary and community sector as owners and advocates for community activism, engagement and programme delivery. Today, HIV care and prevention in the community is evolving from programming that is specific to particular diseases and groups towards a more integrated approach that includes primary care, multicondition approaches and collaborative partnerships that are focused on HIV and its wider determinants.

In January 2018, the Mayor of London, Sadiq Kahn—together with London Councils, Public Health England and the NHS England—joined the Fast-Track cities initiative. To date, the success seen in London has been the result of the collective efforts of local government, the NHS, clinicians, the HIV voluntary and community sector, and people living with HIV.

As London approaches HIV elimination, however, there will be many more challenges. For this next phase, the value of the Fast-Track cities initiative will be in bringing all key stakeholders involved in London’s HIV response together, creating a shared forum for the exchange of ideas and articulating a common purpose that will enable collaboration and partnership that accelerates London towards Getting to Zero.

Despite remarkable progress, HIV remains a significant clinical and public health problem in London. The 5% of people living with HIV who remain unaware of their HIV status include many different groups that may be disproportionately hard to engage. As the prevalence of undiagnosed HIV infection falls, late diagnosis will become more challenging, and new approaches and tools will be required. In London, late diagnosis has a disproportionately high impact on older people, heterosexuals and people from diverse ethnic backgrounds, which will require tailored approaches to community engagement, testing and care.

Persistently high levels of HIV-related stigma and discrimination remain a major obstacle to overcoming HIV in London. A 2017 survey of Londoners living with HIV showed that 14% had not told anyone about their HIV status other than health-care professionals. A further 8% reported avoiding seeking health care when they needed it in the past year due to perceived stigma and discrimination, and 4% said they had been refused health care or experienced a delayed treatment or medical procedure in the past year due to their HIV status.

A recent YouGov survey, commissioned by the Terence Higgins Trust, highlighted the very low levels of awareness of U = U, even among LGBTI respondents, who said they would avoid sexual contact with someone living with HIV who was virally suppressed3. Concerns about HIV stigma within the NHS have also been identified as a continuing challenge by those living with HIV; more work will need to be done in primary, secondary and specialist services to tackle this problem.

Since signing the Paris Declaration, London has convened a Fast-Track Cities London Leadership Group with senior representatives from the city’s four accountable health and care bodies, and from people living with HIV, clinicians and community-based organizations. London is fortunate to have a citywide transformation and delivery unit called the Healthy London Partnership, which
convenes partners from across the health and care system to propose strategies with the ultimate goal of making London the world’s healthiest city. Healthy London Partnership is the delivery partner for Fast-Track Cities London, and it is providing expertise and programme management of the initiative on behalf of the Fast-Track Cities London Leadership Group.

Based on key stakeholder engagement and an asset and gap analysis, the Leadership Group has identified key priority areas for action. These priority areas are captured in the London Fast-Track cities strategic road map, which aims to focus coordinated activities in four areas: systems leadership, advocacy, collaborative delivery, and communications and engagement. This strategic plan will ensure the London Fast-Track cities initiative is aligned with wider strategic plans, such as the Mayor’s Health Inequalities Strategy and the long-term plans of local government and the NHS (For more on these wider strategic plans, please see: The London health inequalities strategy, September 2018. London: Greater London Authority; 2018 (https://www.londongov.uk/sites/default/files/health_strategy_2018_low_res_fa1.pdf)).

To support the delivery of the Fast-Track cities London strategic plan, NHS England has made a financial investment totalling £6 million over a three-year period, enabling the development of a major work programme. Industry partners have also pledged their financial support for London’s work.