Mumbai was one of the first cities to sign the Paris Declaration in 2014; since then, it has rapidly adopted measures to accelerate progress towards the 90–90–90 testing and treatment targets. At the launch of the city strategic plan in 2019, the Municipal Commissioner of Mumbai, Praveen Singh Pardeshi, affirmed the city’s commitment to the goal of ending AIDS by 2030: “Our priorities include reaching the unreached, increasing access to testing and focusing on the continuum of care, including [antiretroviral therapy], with an intensification of efforts on the gaps and challenges3.”

¹Based on Mumbai city data supplied in August 2019.

In April 2018, the Mumbai Districts AIDS Control Society (MDACS), in collaboration with UNAIDS, hosted a workshop for more than 60 participants from government, multilateral organizations and civil society organizations to contribute to what was to become the Mumbai City Fast-Track Plan (2018–2020).

The report found that nearly one third of new HIV infections occur through commercial sex. HIV transmission between regular partners is often facilitated through groups such as the clients of sex workers, migrants and other vulnerable groups1. Information currently available suggests that issues such as rapid urbanization, migration and changing behaviours have led to the creation of hidden groups that are at high risk of HIV exposure. With the development of communication technologies, for example, patterns of sex work have changed: female sex workers are now more likely to sell sex from home using mobile phones, rather than in brothels and public venues. This presents new challenges for the AIDS response and reaching sex workers and their clients with HIV services1.

In terms of the response, the report found that MDACS, in collaboration with nongovernmental and community-based organizations, was offering sufficient focused interventions, including prevention and testing services, for key populations and other populations at higher risk of HIV exposure1. Despite this, there are large numbers of people who are not part of these groups and thus who do not know their status, or who present late for testing.

Key recommendations from the analysis included conducting more regular and detailed analysis of data and upgrading outreach models to reach and address the needs of hidden populations1. A mix of communication strategies are also needed, as are new strategies to improve linkages from prevention to treatment and to scale up treatment and care services for people living with HIV.

The strategic plan
The Mumbai City Fast-Track Plan puts people at its centre and focuses on key populations and people living with HIV, as well as their spouses, partners and regular clients. The purpose of the plan is to reach the 90–90–90 targets and end discrimination by 2020.

To achieve these goals, the strategic plan aims to reach groups who are at higher risk of acquiring HIV but who do not identify as key populations. These include young people (aged 15–25 years) and temporary migrant workers. In addition to intensifying and adapting prevention programming, the plan prioritizes the integration of primary health, social protection and vulnerability services to meet the needs of focus communities. It also aims to create new partnerships with the private sector and strengthen existing partnerships.

The Mumbai City Fast-Track Plan is evidence-informed, and its implementation depends on comprehensive monitoring that will allow interventions to be shaped and adapted over the long term. It also recommends innovative strategies to leverage funding to ensure the availability of sufficient resources for the HIV response.

The strategic plan has generated a wide range of new activities, from geospatial mapping of the epidemic to innovative approaches to reaching key populations. Examples of the latter include the provision of HIV prevention and testing services for migrant workers at seven rail construction sites, and late evening outreach camps at key population hotspots in the city. A Know Your Status campaign provides screening at railway stations with the aim of normalizing HIV testing, while a new Internet-based peer outreach approach is geared towards gay men and other men who have sex with men who use dating apps and who may engage in high-risk behaviour.

Plans to meet the testing and treatment targets include viral load testing for all people living with HIV by December 2019.

Alongside its strategic plan, Mumbai has developed a detailed communication strategy based on up-to-date information and discussions with focus groups. The strategy is disaggregated for different audiences, such as female sex workers, gay men and other men who have sex with men and transgender people2. Tailored content and appropriate media will help the messages meet their mark. The intention is to make full use of digital technologies alongside peer education and traditional mass media strategies.

The Mumbai City Fast-Track Plan has support from the city’s mayor and municipal authorities, as well as new partners from the private sector. 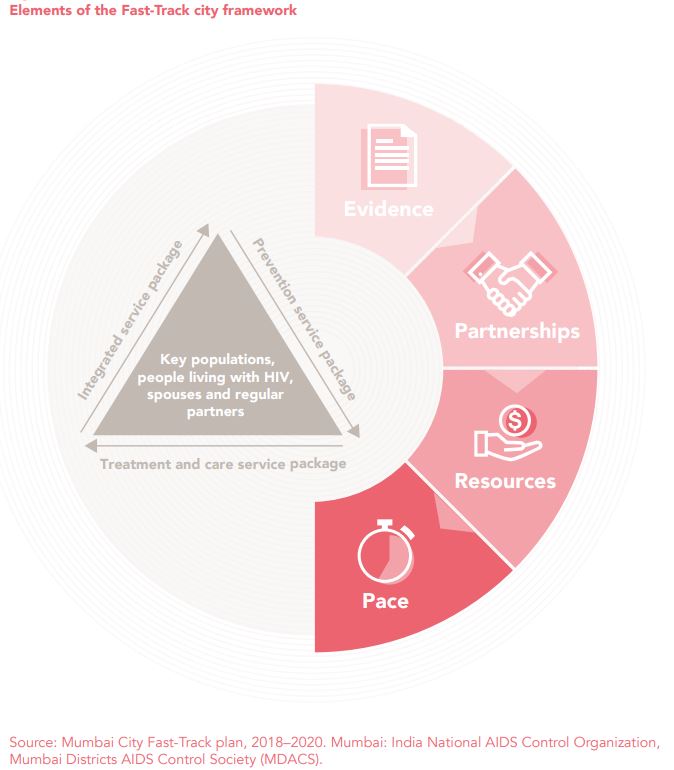 1 A situation and response analysis of HIV and AIDS in Mumbai districts, Maharashtra. UNAIDS; 2017.